The Birth of the World's First Lock

To the best of our knowledge, the world's first lock was a crocodile. Just as we use animals today to protect our property – look at all the Beware of Dog signs people put up to scare of potential burglars - crocodiles were once used to protect property. 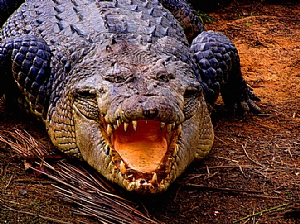 When the Indian Emperor of Annam wanted to protect his valuables in the castle, he dug giant moats around it and ordered his servants to place all of his gold coins and treasure in giant wooden chests.

The emperor then submerged the wooden treasure chests in the depths of the moat, which he then filled with hundreds of crocodiles to protect his treasures. The crocodiles were kept constantly hungry so that anyone who dared to enter the moat to steal the treasure would end up in the stomach of the hungry crocodiles.

Because the only way to reach the submerged treasure was to drug or kill the crocodiles, people would pour strong liquid drugs into the moat and the crocodiles remained drugged most of the time.

Keys and locks were often mentioned in the pre-Christ era, and frequently in the Old Testament, for example, "…put its doors and bolts and bars in place" (Nehemiah, 3:3).

In English, the word locksmith is derived from the name of an expert blacksmith named Smith who manufactured amazingly beautiful top-quality locks for his day, hence the name locksmith.

The first mechanical locks were made of wood and manufactured in various cultures. There is evidence that locks were first used in Egypt 4000 years ago. The wooden lock contained a pin mechanism that was drawn downward by the force of gravity to lock the door. Keys were large and made of wood, with teeth. The locking mechanism involved pushing the lock and rotating it, much like locks today.

The first metal locks appeared in 870 AD and are attributed to expert English craftsmen.  These were simple bolt locks used on large gates in yards. People used what looked like a large wooden handle that rotated around the door and prevented strangers from entering.

For centuries, locks were used to shut doors, protect property and prevent prisoners from escaping by attaching the infamous heavy iron ball and chain to their legs. 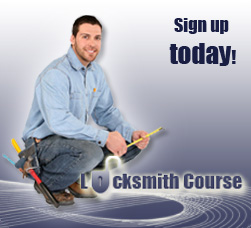